To fans and supporters of cabaret in Chicago, the annual convention sponsored by the Mabel Mercer Foundation is a way of keeping in touch with our exemplars and mentors. Chicago Cabaret Professionals recognized Donald Smith and The Mercer Foundation for Special Recognition in 2012, along with KT Sullivan as National Honorees in 2017. This year’s hosts included Andrea Marcovicci, who was our Lifetime Honoree in 2010. Jeff Harnar, this year’s CCP National Honoree, was to have been present to receive the Mabel Mercer Award but was unfortunately indisposed and was honored in absentia.

Members, mentors and friends of Chicago Cabaret are Attendees

Among the participants were many of our mentors including Marilyn Maye (CCP Lifetime Honoree, 2012), Lina Koutrakos (CCP National Honoree in 2019, performing with the trio Clearly Now) and Lennie Watts of Singnasium a recent visiting mentor. We had at least two active members perform: Spider Saloff (CCP Gold Coast honoree in 2012) sang her rendition of Cole Porter’s “Tale of the Oyster”, and Josephine Sanges sang her stylish rendition of “Ding Dong, The Witch is Dead” which, incidentally, she previewed in her performance on our Cabaret Beat (check it out on YouTube). 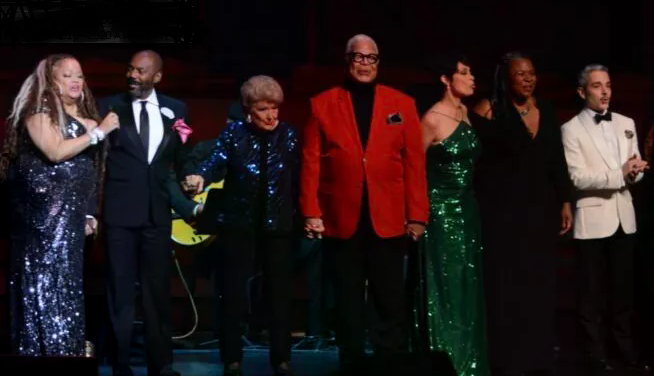 Significantly, the host of the second conference evening was our friend Natalie Douglas (and Mabel Mercer Foundation Education Director) who inspired some of us here in Chicago to create Black Voices in Cabaret. Douglas honored us with participation in Healing Through Song, an award-winning video produced to promote greater inclusion of black voices, new venues and audiences for cabaret. That the Mabel Mercer Foundation dedicated a whole evening to the legendary Nat King Cole was gratifying.

We can’t all afford the time and expense to travel each fall to NYC for this great event, but occasionally we have a member, like Chicago Cabaret Professional’s Susan Susman, singer and poet, who has made the journey for the last two years to see, as she states, “the best cabaret singers.”

Beginning with a physical description of the Rose Theater, the home of Jazz at Lincoln Center, “a beautiful, modern performance space with a large stage” wide enough to accommodate a jazz orchestra, it is a venue that holds over a thousand people with audience and entertainers sharing a single space. Cabaret musicians were onstage throughout the performances, often switching out after different acts. The venues’ open staging, with entertainers entering from the wings as they were announced by each evening’s host to take centerstage, created a fluid series of top cabaret acts.

Susman recounts that last year’s convention was a tribute to Irving Berlin. “This year was different. Each of the three evenings was dedicated to a different songwriter or theme.

The first night was dedicated to the songs of lyricist Yip Harburg, hosted by Andrea Marcovicci. She beamed playfully as she sang. Jeff Harnar was supposed to join her as cohost but was not available. The Mabel Mercer Award was presented to Harnar in absentia. Andrea Marcovicci held up a large plaque that would later go to him.

Highlights of the evening included, Clearly Now, a trio of singers, comprised of Sean Harkness, Lina Koutrakos and Marcus Simeone. Their harmonies were lovely, their performance was peaceful and calming. Listening to them I felt thoroughly relaxed. The music was lovely.

Marta Sanders was the highlight of the evening for me. She sang a moving rendition of “Brother Can You Spare a Dime?” She looked utterly defeated. I can still see her there, arms outstretched, pleading with an invisible comrade. I’ll never forget it. I felt like crying.

Introducing “Silent Spring/Adrift on A Star,” Ari Axelrod talked briefly about Kristallnacht and the antisemitism that still exists in the world. You could’ve heard a pin drop. As you know, the name Kristallnacht (literally Crystal Night) comes from the shards of broken glass that littered the streets after the windows of Jewish-owned stores, buildings and synagogues were smashed in this 1938 pogrom against Jews carried out by the Nazi party’s stormtroopers, Hitler Youth and German citizens throughout Nazi Germany. The authorities looked on without intervening. When Axelrod finished singing, the applause was deafening. I felt a chill go down my spine. As a Jew it had special meaning for me.”

The second evening was a tribute to Nat King Cole, hosted by Natalie Douglas. She was warm and put me at ease. I was smiling as she sang and it was lovely. So many amazing performers: Aisha de Haas, Darius de Haas, Bryan Eng, Stacy Sullivan and Marilyn Maye.

Bryan Eng was a terrific performer and gifted for such a young man. His playing was truly a joy to behold. I felt happy just to be there. Stacy Sullivan, sister of KT Sullivan was lovely. Talent certainly runs in the family. However, the highlight of the evening for me was Marilyn Maye, who at ninety-four is still singing. She stood there, smiling, a tiny woman who seemed to take up more space than there was on that stage. She seemed to be enjoying herself and so were we.

The third night was called: Through the Years: Celebrating Timeless American Standards. Hosted by KT Sullivan, a soft and lovely, peaceful presence onstage as she presented the singers. She sang and even played the piano, a surprise for me.

Highlights of the evening were: Karen Mason, David LaMarr, MOPEI, Spider Saloff and Sidney Myer. MOIPEI, formerly known as the MOPEI Sisters, is a group of three very young, super talented sisters from Kenya. Hearing them sing gave me chills with their beautiful harmonies. I wished they could have sung more.  One song was not enough.

Chicago’s own Spider Saloff came on stage, red hair shining and sang sweetly. I’ve seen her shows in Chicago. She was lovely as ever in New York.

Sidney Myer was so enjoyable. He dressed down for the evening which alone set him apart. His messy hair and lighthearted wit made him memorable. He made me, and the rest of the audience, laugh along with him as he enjoyed his banter with the audience. Just before he sang, one of the female vocalists sang, “I Hate Men.” As soon as he came on stage, he said, “Obviously I don’t!” The crowd loved it.

The Julie Wilson Award went to David LaMarr. For me personally, he was the most entertaining performer of the evening. An excellent singer as well as a gifted performer. At the end of his song “If I Can’t Sell It, I’ll Keep Sittin’ on It,” he dragged a chair slowly across the stage smiling and watching the audience as he did it. So funny and original. The crowd loved it. So did I.”

Susan Susman concludes, “I went home each night feeling warm and happy. Hearing those wonderful singers and watching their exceptional performances made me feel grateful that I chose to become a cabaret singer and I’m grateful to be a member of the cabaret community.”