Chicago Cabaret Professionals, in this group concert, proclaim that it is high time to break the mold of dwelling mainly on the sounds of our parents’ and grandparents’ generations. Cabaret, mostly grounded in show music, has always been spiced up by pop music of the day, but with the rock revolution (beginning in mid-1950s) pop music sat uncomfortably in our repertoire. This has long since changed.

Beginning in the 1990s and especially since the turn of the millennium pop music has returned to musical theatre and to cabaret. Many musicals now are written in pop, rock, Americana, and other styles besides the classically legit. It is inevitable that cabaret would take notice.

In fact, many of our cabaret artists celebrate recent and contemporary pop composers and performers. So this was a whole evening highlighting the many modes of popular music in a cabaret revue featuring our top acts and newcomers coming on strong. 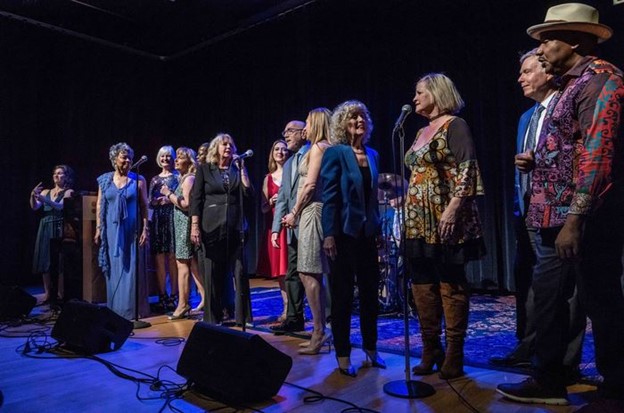 Our host, Wydetta Carter, got the evening going with the hot sound of “Me and Mr. Jones,” signaling that we got a ‘thing’ going and it’s probably not some enchanted evening! Lithe and shiney, in a golden gown, Anna Palermo brought a cautionary mash up of Pink’s “Just Give Me a Reason” and “Talk in My Sleep” about what can happen when dreams speak out-loud.

The dreamy vocal duo of Joanie Winter and John Escola, of Let’s Duet, paid tribute to beloved collaborator Pat Rusk with “The Prayer.” The transition of Pat Rusk and the dedication of members like Joanie and John brings deep awareness of the passage of time along with a transcendent musical moment.

Cabaret icon and our past-President at CCP, Joan Curto, updated us on her latest excursion into popular music with a mini-tribute to Carole King. She asked the audience if this is something she should pursue and there was a resounding acclimation that she surely should. My only caveat is that she should never leave behind Cole Porter and Stephen Sondheim, but I’m sure she wouldn’t!

Neely Benn, whom we got to know recently in her Cabaret Beat interview with Wydetta Carter, is a refreshing and talented storyteller performing with an agile pop style and expressive presence. Her song “Lover” was signed as well as sung and was mesmerizing. We can all love that!

Another past-President and the evening’s Producer, Laura Freeman, brought on her partners in Girls Like Us, with the power ballad “Jolene.” A long-time advocate of pop music (especially the “Girl” groups of the 50s, 60s and 70s) Laura and sister-woman Marianne Murphy-Orland and Beckie Menzie knocked “Joline” out of the park.

Cathy Glickman calmed us with her rendition of the nostalgic “Desperado” and T. Patrick Davis heated things back up with the folk-rock hit “Give Me One Reason.”

Cory Goodrich, a Jeff-Award winning Chicago theatre artist, whose Covid-19 parody was featured in these pages, is also beloved as a singer-songwriter.  A welcome addition to the pop line-up was “The Joke,” an anthemic ballad popularized by Brandi Carlile in 2018, so apt for our times. Goodrich’s song reasons in favor of the marginalized in our society: we’ve seen the movie, know how it ends and the joke’s on the perps.

Much has been written about Jimmy Webb’s multiple award-winning composition “MacArthur Park” which adds my generation’s cake (left out in the rain) to the concept of spilt milk, standing in for a romantic breakup. And in the hands of cabaret head-liners Tom Michael and Beckie Menzie, it really ripped my heart out. Tom and Beckie’s vocals pierce the orchestral complexity of Menzie’s powerful piano to serve us one of the most memorable renditions of this often covered pop standard.

What could top that? Well, on came Cynthia Clarey and we found ourselves in the hands of an expert. Her powerful mezzo (or is it a bass?) leaves us with a blues-hearted hope that “Change is Gonna Come.”

The second half of this pop cavalcade returned with slightly more up-beat offerings. Highlights included Cory Goodrich’s “I’ve Been Everywhere,” Neely Benn’s transporting “Fall on Me” and Winters and Eskola’s “Happy Together.” A standout was Joan Curto’s perfectly personified cover of Sara Bareilles’s “She Used to be Mine”, so often sung since the pop singer-songwriter took the theatre by storm in Waitress. In my experience it has never been sung better.

Some second half offerings were haunting, like Cynthia Clarey’s “I Can’t Make You Love Me,” and Tom and Beckie’s “Beatles Mashup.” The evening concluded with a group sing of “Lean on Me,” an invitation that the audience took to heart and home the better for knowing what CCP can do with popular music.