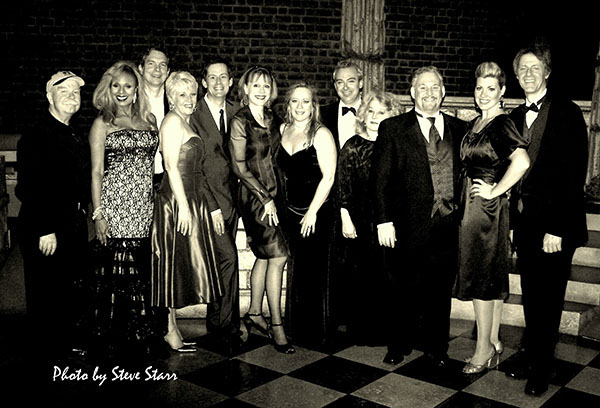 Cast of an early Musical Mondays event on the Magnificent Mile

After long experience producing annual fundraisers, CCP began considering other opportunities for group cabaret concerts to bring the best of cabaret to Chicago audiences. Realizing that many theatres were interested in hosting concert series to keep their “dark nights” booked, these off-nights in theatre being typically on Monday, the word went out.

Our founding past-president, Suzanne Petri, remembers what happened next: “It all began in November 2007 when Jim Jensen called me and said he was interested in collaborating with CCP at the Drury Lane Water Tower Place, where he was General Manager. Joan Curto, Bob Moreen and I met with Jim and talked about doing off-night shows in that beautiful, refurbished theater. Jim suggested we tap the talents of Gitta Jacobs, an accomplished producer, to support us in the endeavor. Jim and Gitta had been CCP Advisory Board members for many years. They had been invested in our growth and ability to create cabaret entertainments from the ground up.  We met to discuss details and ideas, and to create a small committee to work with Jim.

The committee, Joan, Bob, MaryMonica Thomas, Carla Gordon, Laura Freeman, Heather Moran and I,” Suzanne goes on, “met a few times to discuss details, plans and ideas and then we met with Jim at the Drury Lane on January 3, 2008, to find a date and create a two-hour show with intermission.  Drury Lane would provide everything needed as far as tech, ticketing, publicity, etc. and we would cover our personnel, performers, group promotional materials. Gitta and I worked on the budget and Heather was working on PR material.” 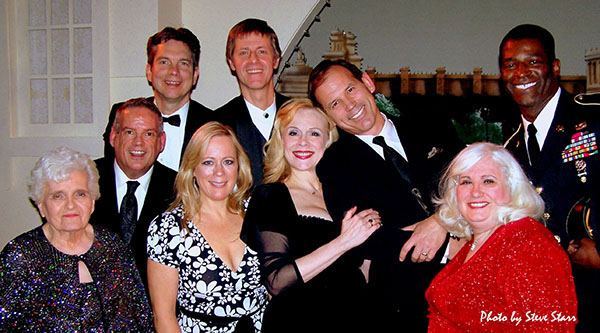 After approval by our Board of Directors, the proposed first date was to be February 18, 2008, we signed a contract with the theatre and Howard Reich announced in the Chicago Tribune for January 16:

The venue where Tony Bennett, Pearl Bailey, Ella Fitzgerald and other jazz stars once performed will spotlight Chicago vocalists on Feb. 18 for “My Fair Cabaret,” featuring the music of Frank Loesser, Alan Jay Lerner and Frederick Loewe.

“My Fair Cabaret,” running on a Monday night, will not interfere with Drury Lane’s current production, “Altar Boyz.”

The critical response was enthusiastic:

Last February, on one of the coldest nights of the year, Chicagoans swarmed into Drury Lane Theatre Water Tower Place to hear live music.

It had been 24 years since the venue had swayed with the sounds of jazz and cabaret, and the huge turnout on that freezing Monday evening augured well for future concerts at the refurbished Drury Lane.

As in Musical Mondays.

Coming off a very successful cabaret show in February that saw 400 people turn out despite some horrible weather, CCP has gotten the green light from Kyle DeSantis, president of Drury Lane Water Tower Place, to begin programming a monthly cabaret series on Mondays. “We have lots of ideas and we’re thrilled about this going forward, Petri says. 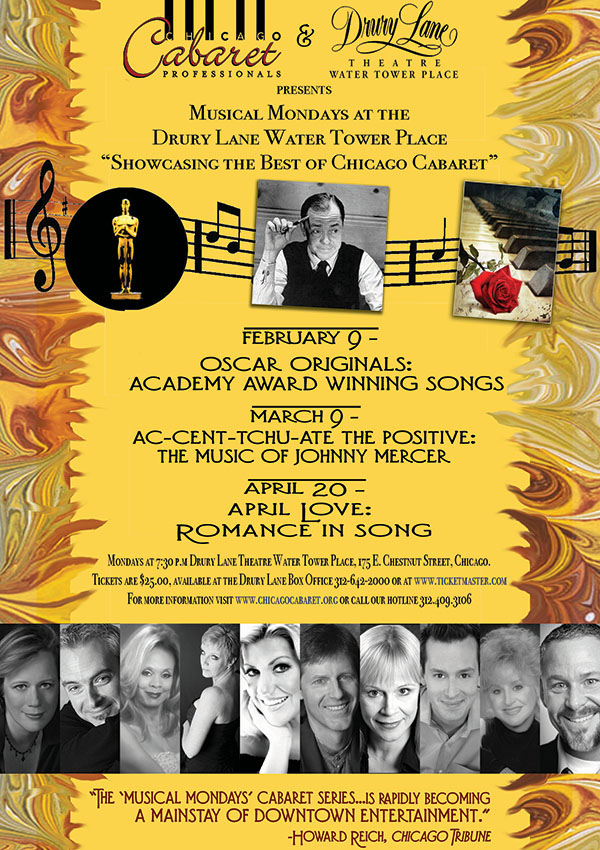 The series went forward with such programs as Everything’s Coming Up Rosie, Those Were the Days: The Heyday of Chicago Nightlife, and All-American Songwriters: The Music of Gershwin, Porter, Berlin, Ellington and More!

Petri reports that the series continued at the Drury Lane Water Tower Place until the theatre changed hands becoming the Broadway Theatre under Broadway in Chicago management.

After such a prestigious beginning it was challenging to find another appropriate venue.

In an interview, Joan Curto told Howard Reich in 2014: “It’s true that since we stopped doing it, I can’t tell you how many people have said to us, ‘Are you ever going to do that series again?’ We always wanted to … but there were a lot of logistics involved in doing this again. Where could we do this? Where did it make sense?”

After a concerted search for a new venue, CCP, under Joan Curto’s leadership, revived Musical Mondays at Victory Gardens Biograph Theater with Legends of Broadway in 2015.

Cabaret often is called the fragile art, but it sure wasn’t fragile on Monday night. With a capacity audience crowding Victory Gardens Biograph Theater, several of the city’s most accomplished cabaret artists launched the new season of the Musical Mondays series at full throttle.

The series continued seasonally at the Biograph until pandemic shut-down. During that period, for one season CCP experimented with producing Musical Mondays at both the Biograph and at The Skokie Theatre. One edition at Skokie in 2017 was the memorable All That Jazz: The Music of Kander and Ebb, directed by Jeff Dean with Music Direction by Pat Rusk and a cast of Wydetta Carter, Jeff Dean, John Eskola, Scott Gryder, KT McCammond, Jan Slavin, Cheryl Szucsits and Scott Urban. One fan asserted that this show was so successful it should have gone out on tour! 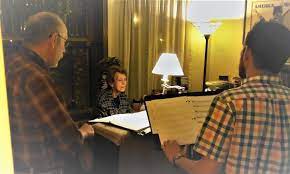 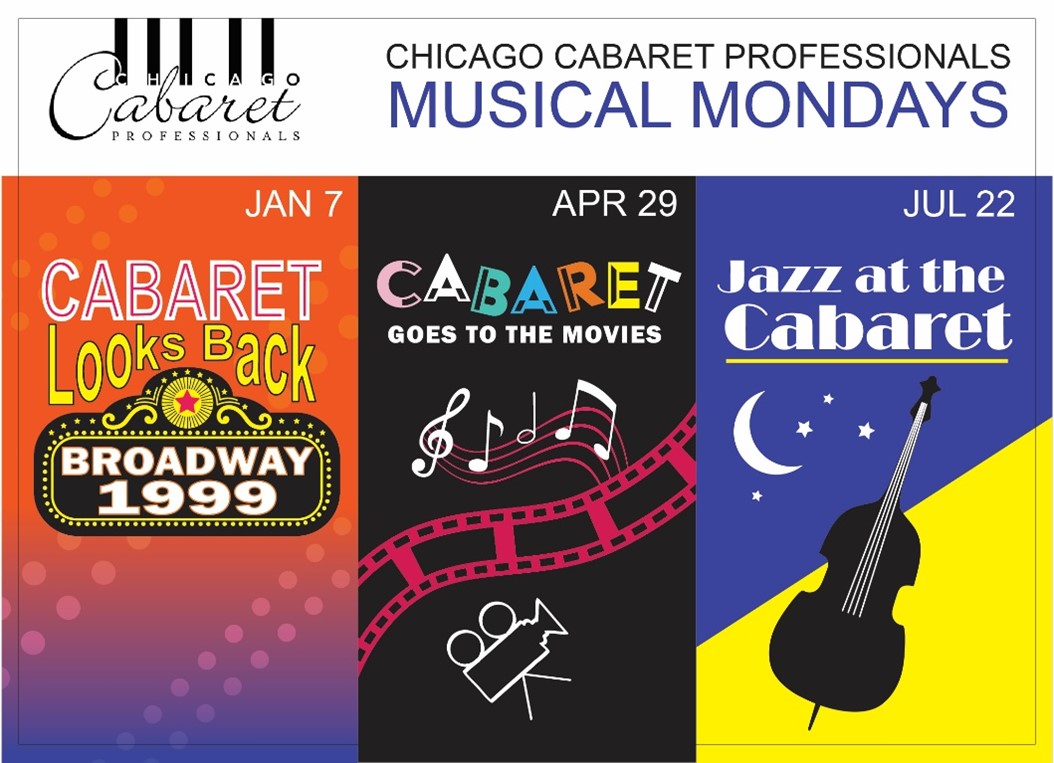 Reflecting on our last season, all three shows in 2019 were successful artistically, befitting our mission, but by the end we were also proud to note that our final event sold out.

For upcoming events, Charles Kouri of our public relations committee writes: “This spring, Chicago Cabaret Professionals is hosting two unique cabaret concerts — Musical Mondays — showcasing the talents of more than 25 local cabaret artists. The concerts will be at the Myron R. Szold Music & Dance Hall, in the Old Town School of Folk Music. 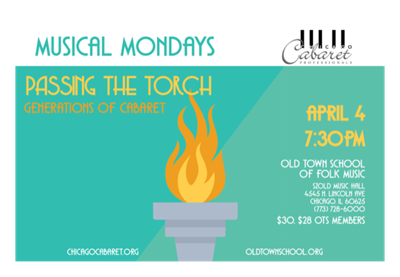 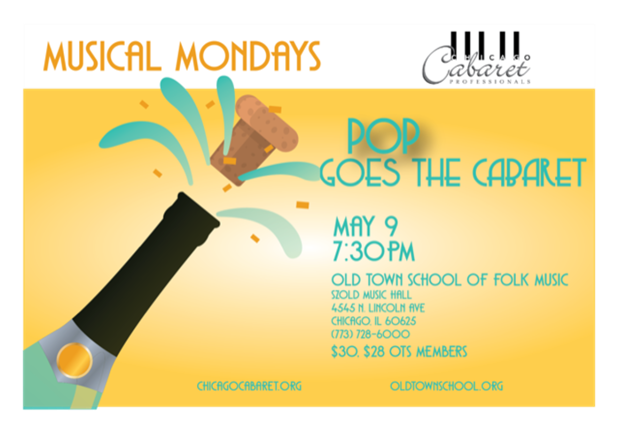 “We are excited to relaunch Musical Mondays at the Old Town School, which is a fabulous venue for performance and dance,” said Anne Burnell, president of Chicago Cabaret Professionals.

The 2019 season was a huge success with a sellout final show. Then Covid postponed Musical Mondays until now, and after two years without ticket sales, Chicago Cabaret hopes for another sell out!