It was one of the most famous nightclubs in Chicago history, perhaps the most famous. Owned and operated by the Marienthal brothers and located on the busy Rush Street strip, Mister Kelly’s existed from 1953 to 1975. Everyone who was anyone played there, from Bette Midler to Richard Pryor. Singers, comics, instigators: they all had their moment in the sun at Mister Kelly’s. There were even a few odd surprises over the years such as the time when the writer and poet Maya Angelou sang calypso songs onstage (this was during the short-lived calypso phase in the late 1950s). 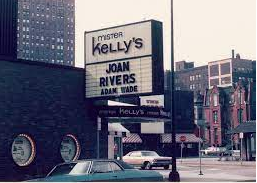 A new documentary, Live at Mister Kelly’s, was released in October 2021 and received its American premiere at the Siskel Film Center. Directed by Theodore Bogosian with narration by Bill Kurtis, the film tells the behind-the-scenes story of the famed nightclub. But it was no easy feat. Like many documentaries, it was a laborious process. Live at Mister Kelly’s was, says Bogosian, “a labor of love” that took a long six years to complete.

The film also includes one of the last, if not the last, appearances by Mort Sahl. Sahl passed away on October 26, 2021, at the age of 94. Like fellow comic Lenny Bruce, Sahl was a controversial figure during his time as well as a staunch free speech advocate. His death is especially ironic and relevant in that it occurred around the same time as the kerfuffle over Dave Chapelle’s Netflix comedy special The Closer.

Mister Kelly’s was such a popular, and iconic, place that artists loved to record their live albums there.  Artists who recorded at the club include Buddy Greco, Sarah Vaughan, Della Reese, Ella Fitzgerald, Mort Sahl, the Smothers Brothers, Bill Cosby, Muddy Waters, and Billie Holiday.

The club’s owners George and Oscar Marienthal were ahead of their time, bringing in important talent who broke color and gender barriers. As the interviewees stress in the film, the emphasis was always placed on the talent. “The artist was paramount,” says comedian Robert Klein. To Dick Gregory, there was “no place else” like it. In addition to Mister Kelly’s—named after Pat Kelly, the club’s first manager—the brothers also owned the London House and the Happy Medium.

The film begins with Barbra Streisand standing barefoot in the sand on Oak Street Beach, arms akimbo and her back to the camera. Streisand was in town to perform at Mister Kelly’s. The photo shoot took place in June 1963. Streisand liked the photograph so much that she insisted it be the cover of her 1964 People album—a decision that displeased her record label executives to no end who would have much preferred to have her face, not her back, on the cover. Another scene in the film shows David Mamet playing the guitar. He went to Mister Kelly’s and London House with his father. He was a busboy at the latter but he didn’t last too long there, he admits, because he “broke too many plates.”

The film also includes some fun facts: the 1965 Warren Beatty film Mickey One was shot there, for example. But Mister Kelly’s was also the center of some of the most important social and cultural events in American history. When Bonnie Koloc played there John Lennon and Yoko Ono were in the audience, which caused a buzz. Richard Pryor performed the night Dr. Martin Luther King Jr. was assassinated. The comedy duo of Tim and Tom—that would be Tim Reid and Tom Dreesen—made their debut there in 1970, which was a big deal since they were the first interracial comedy duo, while Lily Tomlin made history of another sort when she insisted that women be allowed to sit at the bar.

During a post-film discussion, Tim Reid called Mister Kelly’s “a place of dream fulfillment,” “a dream portal.” But, he added, “You had to be ready. You had to work. It could be a hard audience. Sometimes they got rowdy.”

But all good things must come to an end. The Mister Kelly’s business model became unsustainable due to changing tastes and competition. “People don’t want to go anywhere,” David Steinberg laments on screen.

On a positive note, the Newberry Library has acquired the archives of Mister Kelly’s and London House. The collection is currently being processed by Newberry archivists and if all goes according to plan, the library will sponsor an exhibition celebrating the clubs in the spring of 2024.

Meanwhile, there is Live at Mister Kelly’s. Entertaining, engrossing, and insightful though it may be it is also an important historic document as well as homage to a lost but vibrant cultural icon.

“Once there was a time.”