Following-up our popular two-part History of Chicago Cabaret, this new series, “Those Were the Days,” highlights cabarets of more recent vintage that may have been omitted or given short shrift in our coverage. Denise McGowan Tracy approached us with the suggestion that we reminisce about this 1980’s phenomenon.

Back in the ‘80s, when the world-famous Chicago nightclub Mr. Kelly’s was already a fading memory, there was a place you could go to catch that old-school nightclub vibe, brush up against celebrities, and revel in top-notch music and comedy. In the Ambassador East hotel, across the lobby from the legendary Pump Room, was a gorgeous, swanky, jumping little joint called Byfield’s.

Byfield’s was named after Ernie Byfield, creator and impresario of the Pump Room, which opened in 1938. In its midcentury heyday, anyone who was anyone would bask in the celebrity-studded Pump Room where they would, as Judy Garland sang, “feast and get fleeced.” Patrons would be dazzled by meals served on flaming swords, waiters in red swallow-tailed coats, and nightly sightings of royalty like Bogart, Hepburn, Sinatra, Marilyn…you name the star… holding court in sumptuous Booth One. Ernie Byfield’s “celebrity palace” introduced wild theatrics to the restaurant business.

Decades later, another Chicago restauranteur with a flair for theatrics came along: Richard Melman. In 1971 he launched his company, Lettuce Entertain You, and quickly produced an acclaimed empire of trendy eateries with crazy names like R.J. Grunts and Lawrence of Oregano. In 1976 Melman decided to add some elegance to the Lettuce menu… he bought the Pump Room.

In 1981, Melman decided to offer his Pump Room patrons some post-dining entertainment, and created an intimate jewel of a showroom just a few carpeted steps away. Envisioning “a showcase for local talent,” he opened Byfield’s.

“At first, we had a cabaret in the European mode…5 acts a night…jazz vocalists, folk singers, standup comedians, sketch comics, jugglers, mimes…a little bit of everything.” says McGowan Tracy. After about a year, the format morphed into two acts: opening and closing. “If the headliner was a vocalist, the opening act would be a comedian or variety performer, and vice versa. We tried to make them really complement each other.”

Before long, Melman passed the baton to McGowan. McGowan Tracy recalls the gist of their conversation: “He said to me, ‘OK, you’ve got this. You understand what Lettuce Entertain You is…you understand that we want this to be elegant and sophisticated but fun.’” 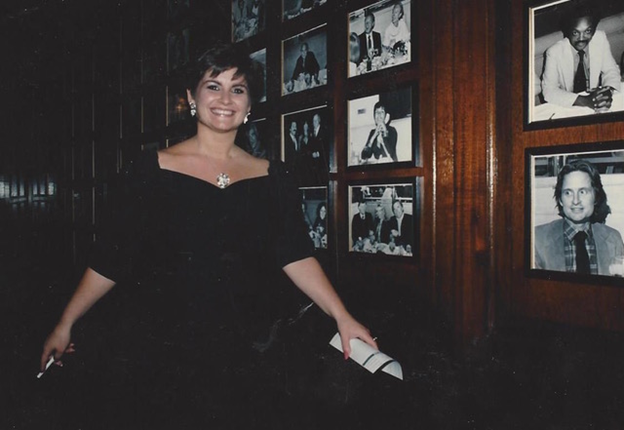 Denise McGowan in front of celebrity photos at the Pump Room.

McGowan Tracy reminisces: “I worked very hard, and I don’t know that I ever had so much fun. It was a party five nights a week.” She booked the talent, took phone reservations, called to confirm, greeted guests at the door, seated them, ran lights and sound… and before long, took over emceeing the show.

“One night the emcee called from the E.R.,” recalls McGowan Tracy. “He’d been in a car accident and wouldn’t be able to make the show. Rich Melman happened to be there and said, ‘Well, you do it. You’re funny.’ I said, ‘I’m funny in meetings but I haven’t been onstage since I played Lucy in You’re A Good Man, Charlie Brown in high school.’ He said, ‘No, no, just get up there and welcome everybody.’ So I got up, I welcomed people, asked where they were from, did a couple little call and response things. When I got off the stage, Rich said ‘Let’s never hire another emcee.’” 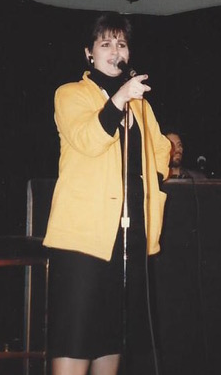 Byfield’s presented six shows each week, featuring only Chicago talent at first, in keeping with Melman’s original plan. Audience favorites included Chicago’s own Pudgy, Karen Mason, Nan Mason, Aaron Freeman and Judy Tenuta, some of whom were starting to achieve national recognition. “But it was hard to get consistent media coverage for just local talent, even with great support from guys like Irv Kupcinet from Sun-Times and Aaron Gold from the Tribune,” admits McGowan-Tracy. “So, we started bringing in bigger names every six weeks to build a reputation.”

Many of the comics Byfield’s brought in were rising stars who were appearing on Late Night with David Letterman and HBO specials. “It was some pretty heady stuff to work with people like Richard Lewis, Carol Leifer, Ellen DeGeneres…in their early stages you could really see the genius,” said McGowan-Tracy, who added, “Once I turned down a rising young comedienne because I didn’t think I could stand listening to her voice for five nights. Goes to show you I made some mistakes… it was Roseanne Barr.”

One of McGowan’s most vivid memories was watching Mort Sahl’s sold-out engagement. “The room was so small… to be that close and watch him six shows a week while he was doing the same stuff and making it sound so fresh… I knew I was watching a legend,” she said. “His asides and off-the-cuff remarks were gold. His story of his visits to the White House during Republican vs. Democratic presidencies was inspired. It was a master class in political and observational comedy. He called me ‘pal’ the entire week and I wasn’t insulted.” 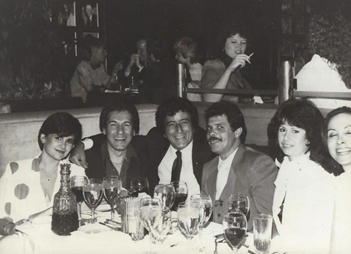 McGowan with Frank D’ Rone and others

Maureen McGovern’s run brought some special moments, including an audience appearance by Tony Bennett. McGowan Tracy recalls one Maureen McGovern performance: “Close to the end of her set, we lost power in the hotel. A total blackout. Emergency lights were dim and just on the walls. She didn’t panic, but instead asked if we would like one more song, as long as there was no danger. The audience agreed. My staff and I got flashlights and used them as spotlights as she sang—in almost complete darkness— ‘There’s Got to be a Morning After’…. She finished and you could hear a pin drop. Then the place erupted in applause and whoops and whistles.”

During the five alternating weeks of local entertainment, McGowan was selective about who she booked. “I ruffled some feathers,” she confided. “I didn’t let people work that room if they weren’t ready. Everyone on that stage represented Rich, Lettuce Entertain You and the Byfield’s reputation. Even if you hadn’t heard of the talent, you knew you’d get top quality performances when you walked into Byfield’s.” 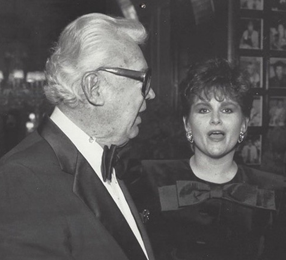 Broadcaster and Restaurateur Harry Caray and Denise McGowan in conversation

In 1987 Byfield’s closed its smoked glass doors for good. The room was just too small to sustain itself financially. McGowan Tracy reflects: “I was so disappointed. You always hope there’d be magic fairy dust that could somehow come out and make the room bigger but there was no way to enlarge it. The fact that Rich kept it alive for so long, knowing that it could not be an economic engine for the company, was really such a testament to him.”

Years later, McGowan Tracy’s special work relationship with Melman led her to pitch him an idea for another type of musical showcase at his downtown Lettuce Entertain You restaurant, Petterino’s. Monday Night Live, the wildly popular impromptu musical showcase co-hosted by emcee McGowan Tracy and pianist Beckie Menzie, ran weekly for nearly 12 years. In fateful 2020, Monday Night Live joined the ranks of Chicago’s all-too-briefly lit nightlife novas. Memories will live on, as they will for the bygone days of Byfield’s.