Meanwhile, back in Chicago, cabaret artists were doing their best to comply with Covid-19 regulations and still perform live. Just as we experienced in the summer of 2020, we found audiences willing to gather safely outdoors to hear live music. 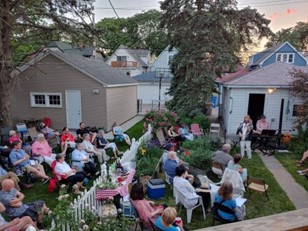 SongShop Live did a series of three garden parties featuring seasoned as well as student performances. The weather was great for their first concert. Then the second moved indoors due to an unusually rainy weekend. Kevin Wood kindly hosted the rain date in his Morton Grove parish. The third concert came off as planned. All three concerts were live-streamed by Working in Concert. 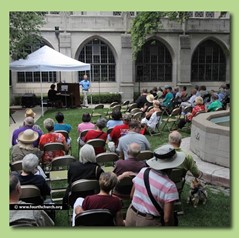 The Fourth Presbyterian Church located in the Magnificent Mile neighborhood downtown hosts regular outdoor music by their courtyard fountain. Member Tom Michael says “We have performed at this particular outdoor concert series for at least the last fifteen summers. It’s always a fun time, but this year was particularly special because it was our first time to perform together for a live Chicago audience since the pandemic began. After doing virtual Zoom concerts for so many months, I was joyous to see so many people turn out. Thanks, Fourth Pres!”

Member Lou Gale tells us she attended a free concert at Skokie on the Green on July 19. “The wonderful duo of Judy and Bernie Rice entertained with their Summer Songbook Show. They regaled us with songs from Broadway, favorites from the Great American Songbook and pop music that included Beatles tunes and much more. We all had such an amazing time.” 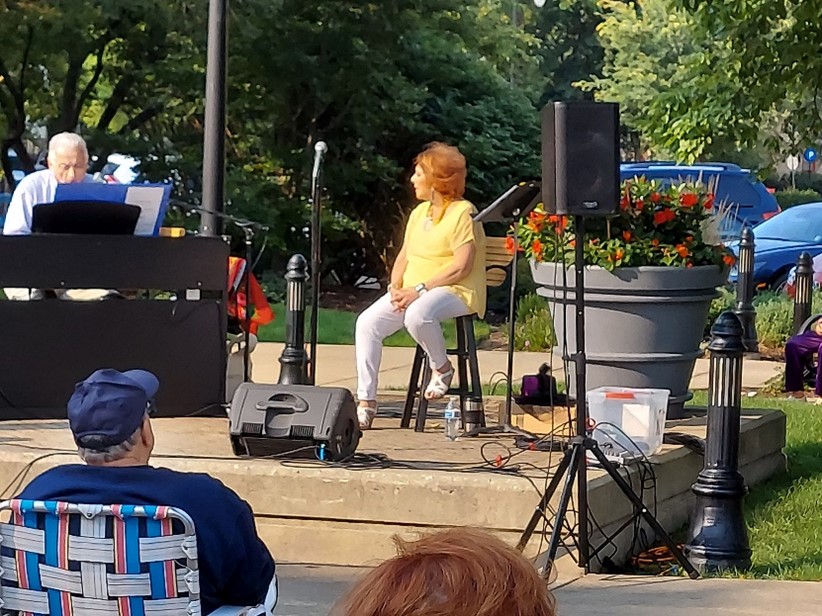 Bernie Rice and Judy Rossignuolo-Rice at Skokie on the Green

Lou continues, “I have to say that a big part of being able to enjoy this was the fact that we felt safe. Everyone brought their own chair, beverages and snacks. We were able to sit comfortably apart and those who wished wore masks. In these times, when everything is still up in the air concerning the pandemic, it was good to be in a place where people could determine their own comfort zone. I think it is very important that we take these situations seriously as we reopen the city and our favorite venues.”

Lou reminds us Wendy Kaplan of Skokie Theater made these arrangements at the request of the Village of Skokie (she did several of these last summer) and provided equipment and technicians. There were two more Skokie on the Green concerts in August. On Sunday August 8th, Anne and Mark Burnell entertained and on the 22nd the group 3 for the Road (with Carla Gordon) were on the bill.

Chicagoans were afraid that the annual Taste of Chicago might be canceled again. But at the last minute the city morphed the event into “Taste of Chicago To Go,” spread out across the city, with pop-up events in different neighborhoods.