Member Charles Troy is a former editor of Quarter Note and is well known to our cabaret community as an expert lecturer on Musical Theater and The Great American Songbook. He has been participating in the annual Cole Porter Festival in Porter’s hometown for several years giving entertaining and informative talks on the town’s famous songwriter. As a respected participant, he has also recommended several of our performing members as a resource to the festival. Here he reports on this year’s festival.

To quote Cathy Day, a Peru, Indiana native, about the town’s greatest claim to fame, Cole Porter: “June 9, 1991 was the 100-year anniversary of his birth, and his fans from all over the world wanted to make a pilgrimage to the place where he was born and where he is buried. They called the city and asked what we had planned to celebrate our native son. So: we planned something. This is how the first Cole Porter Festival came to be.” 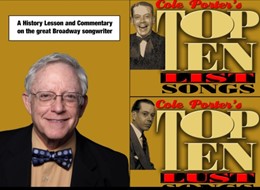 The Festival has been occurring annually ever since, on the second weekend in June, other than 2020, of course. I’ve appeared at every Festival since 2010. For a while, I felt obliged to create a new Cole Porter presentation every year. I finally stopped after seven, though in the last few months, outside inspiration has led me to create an eighth Porter presentation, which I’ll give next year.

The Festival primarily takes place annually on Friday and Saturday, nearest Porter’s birthday, building up to the Saturday night headline event. Two times I’ve encouraged the Festival planners to book Chicago talent for Saturday night, inspired by Cole Porter cabaret shows I’ve seen at Davenport’s. Joan Curto headlined at the Festival six years ago, and this year, Elizabeth Doyle and David Edelfelt were the scheduled act, though that was supposed to happen LAST year. And Elizabeth and David received THREE standing ovations from the appreciative audience.

Music is not the only draw for this four-day deep dive into Peru and Cole Porter. The festival kicked off on Thursday with a progressive dinner party featuring recipes Porter served at his Waldorf Astoria residence in New York City.

Friday featured a luncheon with entertainment by the Peru High School music teacher, who re-enacted Cole Porter, sitting at the piano, playing his songs and talking about his life. Then at another venue, it was my turn, and I presented “Cole Porter’s Top Ten List Songs.” The day ended with a Roaring Twenties party, with entertainment provided by two more CCP members, Matt and Cynthia Gruel. 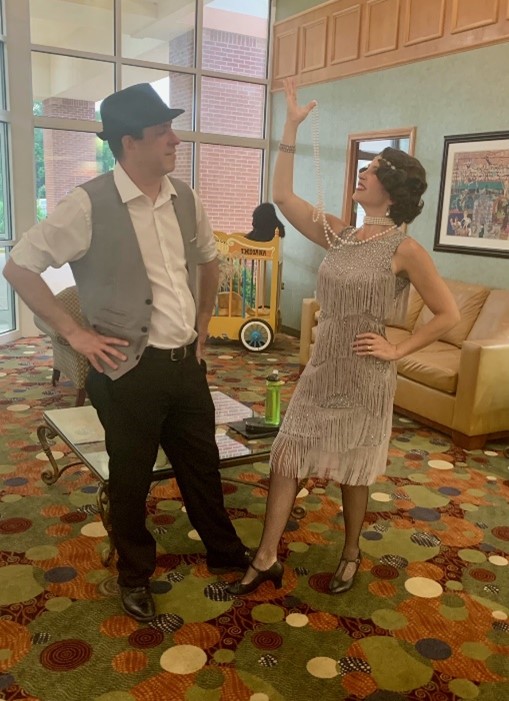 Matt was born and bred in Peru, and his mother still lives there, so the Gruels visit every year, and their performances are an annual feature of the Festival.

Saturday was bracketed by my early morning presentation, “Porter vs. Sondheim,” and Elizabeth and David’s aforementioned show at the Peru High School auditorium. In between, the highlight, as it is every year, was the Cole Porter Bus Tour. A small van took visitors to view several properties connected with Cole Porter’s family: Westleigh, the mansion that was the longtime residence of Porter’s mother, Kate; the Cole Porter Inn, Porter’s birthplace and childhood home; and the Cole family gravesite. The Old-Fashioned Garden was Elizabeth’s favorite tour stop, with the current owner donning a white gown with parasol and passing out lyrics to an early Porter song about Cole’s grandmother’s beloved garden. 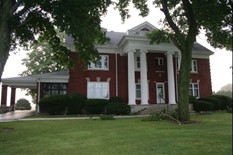 Meanwhile, back at the Festival base, the Miami County Museum, a converted turn-of-the-20th-century dry goods emporium, Porter music was showcased by three different sets of performers. In between acts, visitors could take in the Porter permanent exhibit at the Museum, including one of Cole Porter’s cars, a mint-condition, black 1955 Fleetwood Cadillac. And in the afternoon at another venue, Elizabeth and David offered a new Festival feature, a well-attended songwriting workshop. 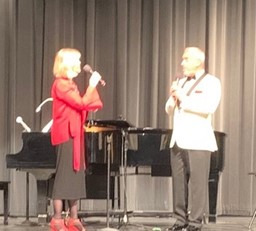 Their Saturday show, “DeLovely: An Evening of Cole Porter,” was replete with a lovely grand piano plus professional sound and lights. They augmented the Davenport’s version of their show with many added and personalized touches. For instance, “I Happen to Like New York” became, in Elizabeth’s modified lyric, “I Happen to Like Peru.” You can just imagine how well this went over the local audience! During intermission, two local students were presented with generous awards for higher education by a Cole Porter family member.

To quote Elizabeth: “Those who love all things Cole Porter will surely want to experience this unique insight into the town where he was born and buried. The Peru Best Western is clean and convenient. If you want a more soigné visit, you may consider staying at the Cole Porter Inn in Peru or the Charley Creek Inn and Restaurant in neighboring Wabash, Indiana.

I met people from points east and west who come every year to this Festival. If you are a Great American Songbook fan, Peru should be on your travel list for early summer, at least once!”

−by Charles Troy, with much assistance from Elizabeth Doyle