THE SKOKIE THEATER KEEPS CALM AND CARRIES ON

It was impressive during the Summer of 2020 how many singers entertained in front porch and back yard concerts. But to our knowledge, only our venue partner Skokie Theater got an outdoor series going in our area. Involving many CCP members and friends, it was a memorable accomplishment. Carla Gordon has the story.

So, when the pandemic limited then ultimately, but hopefully temporarily, closed the Skokie Theater, its owner, Wendy Kaplan put on her thinking cap. Wendy, who was raised in a theatrical family and carries “the show must go on“ attitude in her DNA, began to explore outdoor programming ideas during the warm weather months. Mainly, Kaplan had her eye on the Skokie Village Green, which is an expansive space next to the Skokie Library. The space includes plenty of room for seating and a performance platform with electrical connections for sound and some lighting. Although there are some permanent benches surrounding the space, most audience members bring their own chairs. 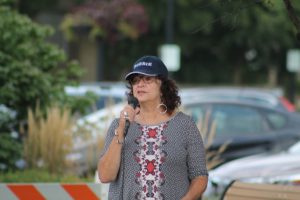 Among the requirements was that at each outdoor show Kaplan, representing the Skokie Theater, had to instruct audience members to wear their masks continually and avoid mingling with fellow audience members and especially performers. Chairs had to be placed at minimum six feet from other audience members. In fact, sawhorses were placed about ten feet from the downstage lip to discourage audience members from the traditional schmoozing with performers. Eating and drinking beverages other than one’s own water was not permitted. Alas, Wendy Kaplan had to repeat these ground-rules before every performance but managed to do so with a positive spirit. 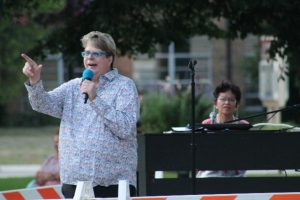 Programming for Skokie’s Village Green Summer Series was varied and entertaining. Daryl Nitz and Ester Hana’s show sold out immediately and there were several encore performances. (Now that the chill is upon us, Nitz and Hana, as well as many of the Summer Series performers, are offering virtual programs under the auspices of the Skokie Theater.) Charlene Brooks’ solo show with able music direction by Howard Pfeifer was filled to its pandemic permissible capacity. Judy McLaughlin Rossignuolo-Rice was joined by hubby Bernie Rice and featured performers Russ Goeltenbodt and Carla Gordon who added an encore performance to “Songs to Make You Smile.” Kevin Wood and cast consisting of The Boomer Babes, Carla Gordon, and Alex Magno encored their spring show, “That’s Amore” with a scheduled performance and a second show when the first audience reached capacity. 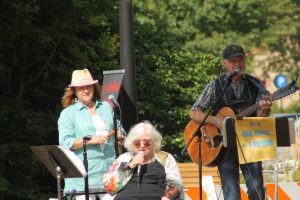 Folk music was represented by Three for the Road and Friends with Aimiee Bass, Steve Bishop, Joss Davidson, Carla Gordon, and founder Bill Lange. Mick Archer brought some rock ’n’ roll into the mix and the Chicagoland’s jazz community was well represented by Anne and Mark Burnell as well as Abigail Riccards and Jeanie Tanner. There were other fun performances as well.

Now that outdoor programming is on cold weather hiatus, Wendy Kaplan has the Skokie focused on virtual programming. Upcoming programs include Daryl Nitz and Ester Hana, Anita Kallen’s and Catherine Thomson’s “Herstory,” Senior Storytellers. Kevin Wood leads his cast in Holiday Happenings to be aired December 12 and 19 under the auspices of Skokie Theatricals, the fundraising arm of the Skokie Theater.